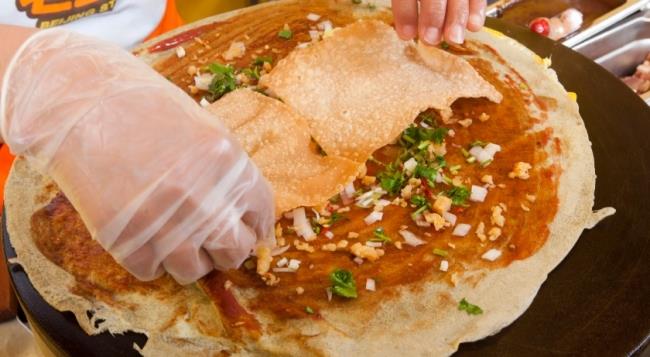 Posted at 09:21h in News by wedescover
Share
This four-character food, is considered, by a large number of Chinese locals and international individuals, a top choice of morning snack. It is light enough to have as the first bite of the day, but also solid enough to give you energy for the whole morning, and still leaves you enough room to enjoy a cup of coffee or soybean milk to go with it.
It’s fairly similar to the French crepes, which might be the reason why it’s well acceptable in the international community in China. Just not like crepes, the stuffing is quite different, and it only has salty flavours.
The name Jianbing Guozi, composes of two terms, Jianbing and Guozi. Jianbing literally means fried bread, which refers to the wrap, which is generally made of wheat flour. Some places now offer the mixture of wheat and other crops to make it a healthier option.
On a side note, Jianbing by itself can serve as a snack already, and there are various popular forms in the market, as shown in the photo below. The ones with scallion and eggs are one of the most liked. But Jiangbing is not to be mistaken with Jianbing Guozi, which is more popular as a breakfast option.
The next photo shows the famous type of Jianbing from Shandong province, for the combination of Jianbing wrapping spring onions with some brown sauce.
Guozi refers to the deep-fried dough inside as the stuffing, which comes in the shape of a stick broken into two halves, or a thinner layer triangular shape rice cracker looking fried dough. They normally place two of them next to each other, and that’s the part that gives the crunchy texture.
The stuffing inside comes with quite some variety. The standard set has a spread egg, some sweet and salty sauce, pickles, chopped up coriander and shallots, and the fried dough. It’s quite popular to add an extra egg into it. On top of that, meat lovers can choose to add some sausages, bacon, fried chicken etc. And then it becomes a meal instead of a light snack.
Jianbing Guozi originally started in Tianjin, and then got popular in Beijing. In recent years it spread into all the major cities in the country. It’s still largely offered as a breakfast option only, even though lots of people don’t mind having it as a lunch or even supper option.
Some fancier version can be found in shopping malls now, so it’s available from morning until the mall closes. But, trust me, those fancied-up ones in the malls, never taste as good as the ones from the street vendors or a hole in the wall type of corner stops in the street. So if you walk on the street before 10am, and pass by a Jianbing Guozi stand, grab one before the service closes for the day.